(NOTE: This blog is primarily intended for Binary Ninja plugin authors – the user-facing component for the plugin manager is under testing and should be released shortly)

We’re pleased to announce the imminent release of Binary Ninja’s Plugin Manager 2.0. This article is intended for plugin authors interested in updating their plugins to ensure compatibility with the new interface. The new UI will dramatically improve plugin discoverability and highlight the many great plugin authors out there.

Getting your plugin listed in the Plugin Manager UI is straightforward. If you already have a plugin in the old repository and just need to update it you can skip to the last section: What about my old plugin?

The first step is to write your plugin and create a GitHub repository for it (our sample plugin can help). While we do plan to add support for Gitlab-based repositories, our current iteration only supports GitHub.

With your plugin in a presentable state, the next step is to create your plugin.json file. We recommend either copying an existing one, for example OpaquePredicatePatcher/plugin.json, or using the interactive command line tool generate_plugininfo.py using the --plugin or the --all options to generate the plugin.json, LICENSE file and the README.md.

To ensure your plugin supports the widest possible audience there are three categories of compatibility you should be test and ensure compatibility.

Binary Ninja supports Linux, MacOS, and Windows, and your license entitles you to run Binary Ninja on all three platforms. We encourage plugin authors to test their plugins on all three. 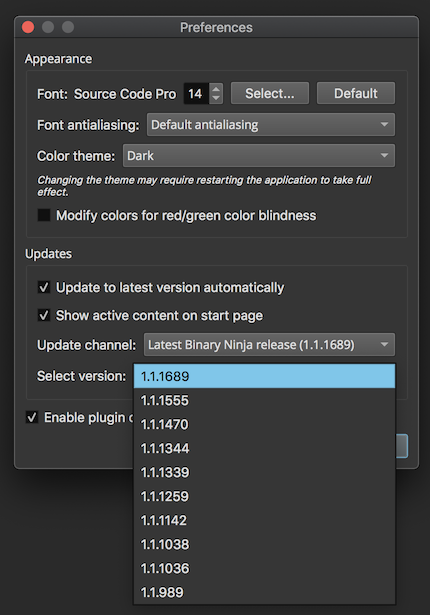 We require all plugins in the Plugin Manager to have a license. The generate_plugininfo.py can help you with this.

A word about license choice:

Our preferred licenses for plugins are MIT, BSD, or LGPL. Licenses such as GPLv2, GPLv3, and AGPL may prevent us from redistributing your plugin. Presumably this may run counter to your desires if you’re submitting your plugin to the plugin repository.

As a change from the previous version of the Plugin Manager we now require users to create official releases of their plugin. If you’ve never used this feature before, it’s simple and we highly recommend GitHub’s hub tool for it.

Let’s say you’ve just made your final commit and your ready to submit your Awesome Plugin 1.0. Your plugin.json and LICENSE has been created and added to your repository. Next, create and push an annotated tag.

Next use the command line hub tool:

You’ll get asked for a title, like Awesome Plugin 1.0.

To submit your plugin to the Community Repository, just file an issue with your specific tag and repository. Here’s an example issue:

What about my old plugin?

If you already have a plugin in the old repository you will need some updates to your plugin.json.