Have you been following our live streams? Join us weekly to discuss the latest changes, plugins, and even see some BN internals.

Today’s entry is a guest-post brought to you from our friends at Kryptos Logic who have been working on a handy plugin we wanted to highlight. They were kind enough to let us cross-post their blog here, but make sure to check out the rest of their posts as well! Note, everything below this paragraph is from Jamie Hankins, not Jordan despite what the “author” tag on this post says!

Last week the Network Security Research Lab at 360 released a blog post on an obfuscated backdoor written in Go named Blackrota. They claim that the Blackrota backdoor is available for both x86/x86-64 architectures which is no surprise given how capable Golang’s cross compilation is.

For the last 4 years we have been using Golang for our internal services, and I can definitely see the allure that Golang has for malware authors:

Blackrota uses gobfuscate to obfuscate their source code before it gets compiled by the Go toolchain. Gobfuscate presents a number of challenges to reverse engineers but the one I’ll be focusing on today is string obfuscation.

Malware has been using XOR encoded strings for years now, but Blackrota takes this a step further1. It generates a random XOR key per string and wraps the string in a function that XORs the string at runtime to return the correct one.

gobfuscate runs before the compilation process to produce an obfuscated version of your code which is then compiled by the Go compiler:

You can use a tool like GCHQ’s CyberChef to verify that the result of those 2 byte arrays XORed together is: Hello world!.

While you could go through the effort of manually XORing each string in a binary you’re reversing, it’ll get tedious very quickly.

How do I solve it at scale?

So I know that Golang has a very capable cross compiler and that I want to deal with these XORed strings across different architectures, but how?

Binary Ninja (aka Binja) has a very powerful intermediate language (IL), which allows us to operate on a representation of a function regardless of the system architecture (assuming there is an architecture loader for it)2.

When deciding on an approach here I specifically wanted to use Binary Ninja’s IL as a learning exercise. The solution could certainly be implemented using any number of alternative tools (e.g. Unicorn), however Binja has the benefit of being very easy to use on any of its supported platforms. Another benefit, of course, is that the IL eliminates the need to understand the target architecture at all, which (depending on implementation) may not be the case using something like Unicorn.

So the solution will need a way of identifying what functions we want to extract the strings from (Candidate Identification) and a way to extract the correct string from Binary Ninja’s low level IL.

Luckily for us, the Go compiler doesn’t inline this function call so it’s seen as an entirely new function:

Assuming the approach I take can avoid the Go runtime functions: _runtime.morestack_noctxt and _runtime.slicebytetostring it should be pretty easy to emulate.

The solution will need to find functions in the binary which call _runtime.slicebytetostring and make use of an xor instruction.

In my first attempt you’ll see that I’m not using the IL for this, but that’s trivially solved in the final solution.

So I made the assumption that HLIL would be the best choice because there was less text. I also didn’t really understand that an IL operation could consist of multiple different IL operations: 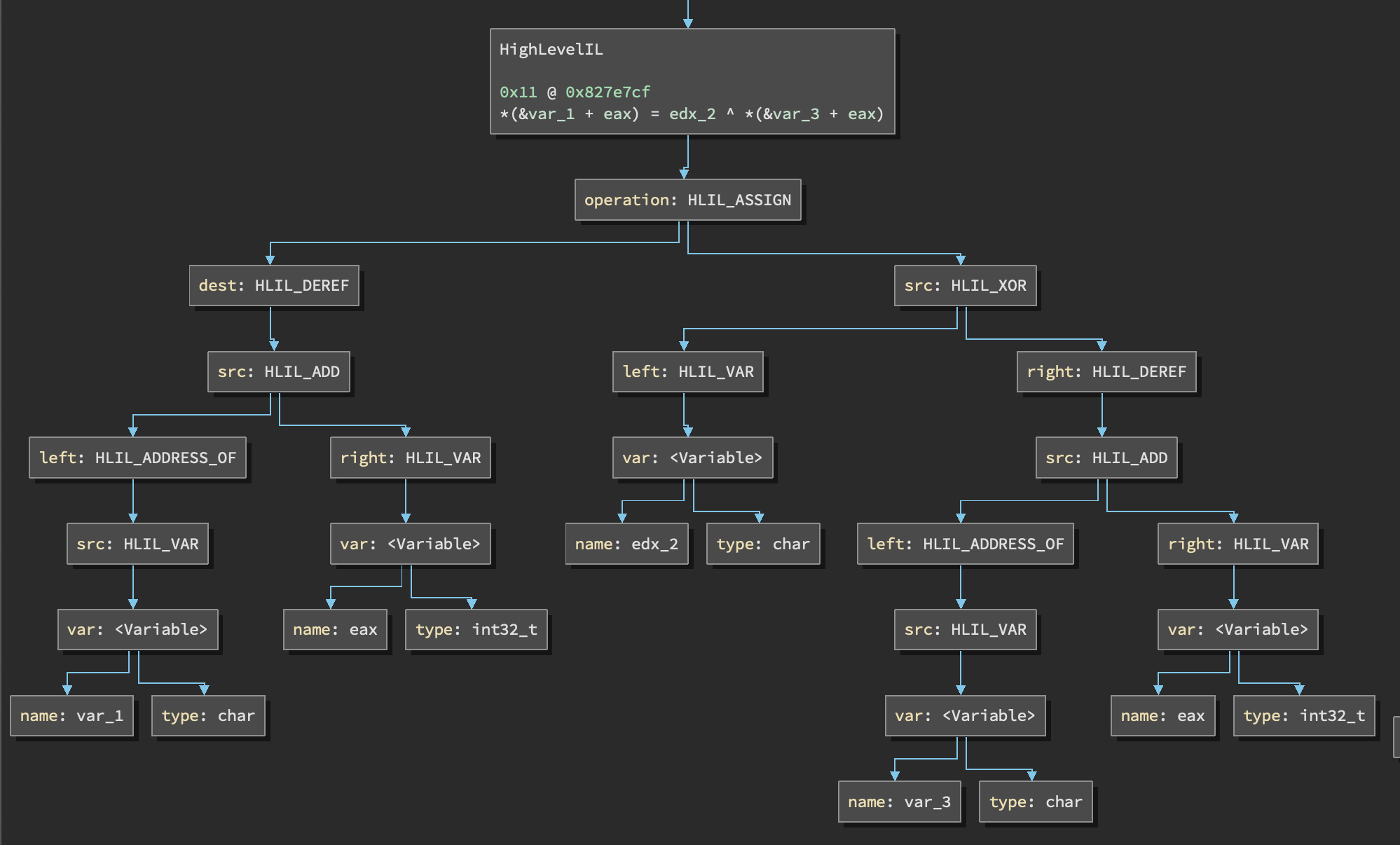 You can see my first attempt here. I wish I had read Josh Watson’s blog post on Binja’s IL before I started working on it as it details some of the non obvious details 😅.

I managed to get some results from this approach but it was not consistent and broke very easily.

I started chatting to Jordan Wiens one of the founders of Vector35, the company who makes Binary Ninja – and he suggested that I should rewrite it using LLIL and a full blown emulator rather than a state machine.

At first this was daunting, but I started to play around with it and thanks to some incredibly helpful plugins which I’ll detail later, as well as a project from Josh Watson which had the foundations of an LLIL emulator, I was able to start making headway.

Using a helpful snippet from Jordan I was able to work out what LLIL operations I needed to implement and in total there were around 28 of them:

Alone none of these seem too complex right? But together they allow us to fully implement what is required to decode the XOR obfuscation in less than 500 lines of code. There’s a huge amount of heavy lifting that Binary Ninja does under the hood that helps us keep the code as simple as possible, and I’m sure I’m missing some tricks.

Once I had something that kinda worked Jordan jumped in and converted it into a functional Binary Ninja plugin and cleaned up some of the code smell that occurs when you’re hacking away on a problem.

While developing the plugin I came across some incredibly useful Binary Ninja plugins which I feel need a mention:

SENinja is a symbolic execution engine for Binja, built using the Z3 SMT solver. It implements a LLIL emulator that builds and manipulates Z3 formulae. Although the intentions of SENinja are much more complex then what I was using it for, it was really useful to have something I could compare with (I didn’t want to turn on a Linux VM and use a debugger and deal with possible anti debugging tricks). 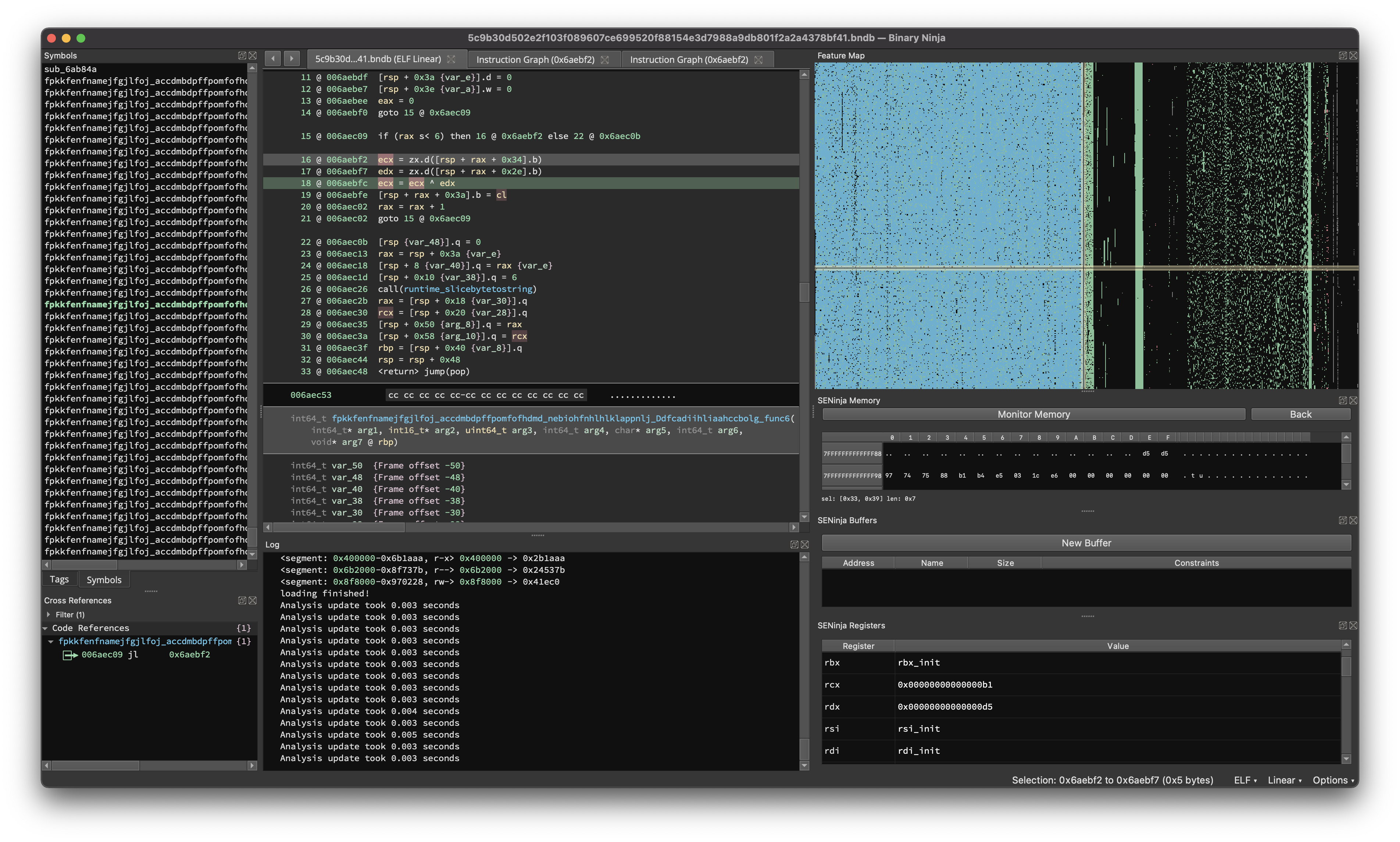 BNIL Instruction Graph allows you to click on a line of IL and generate a graph of the IL operations that make up that line. 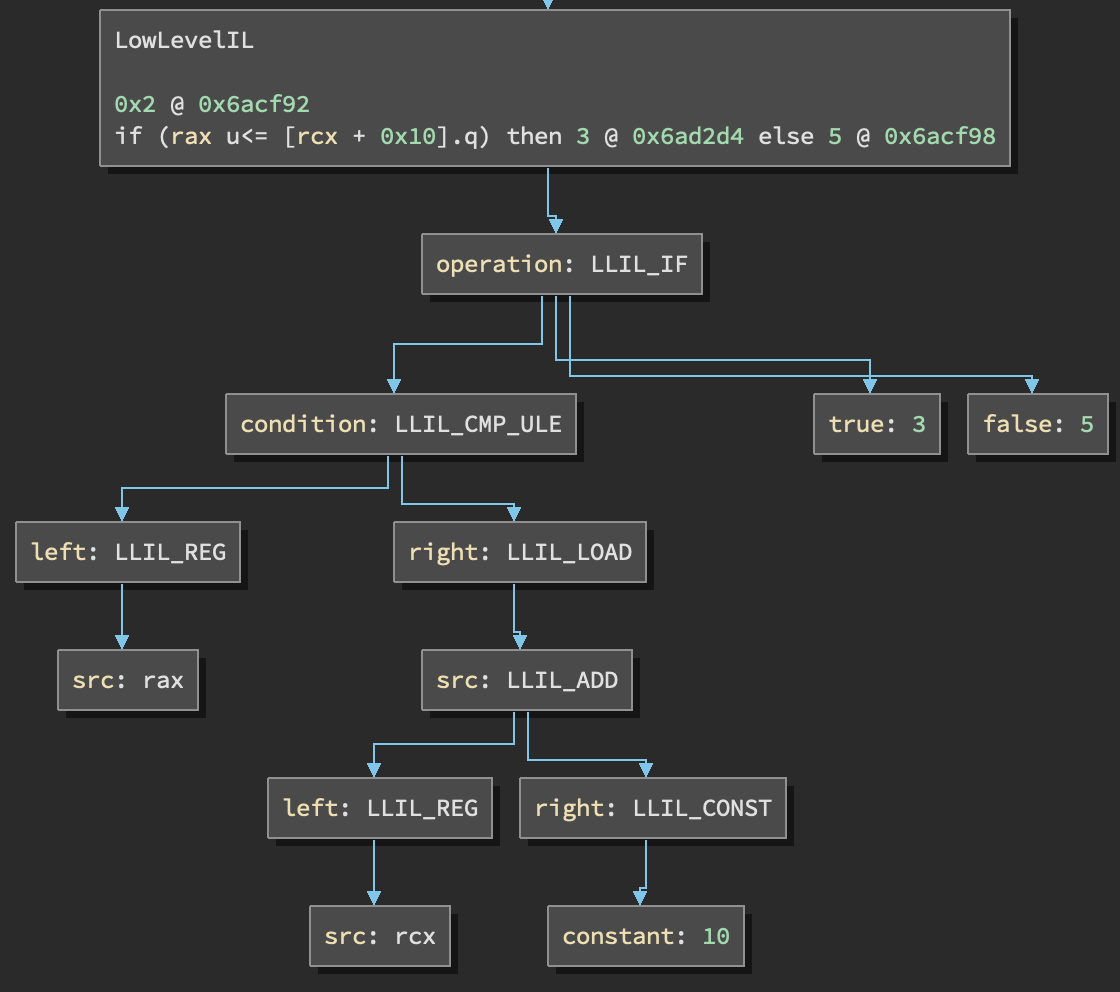 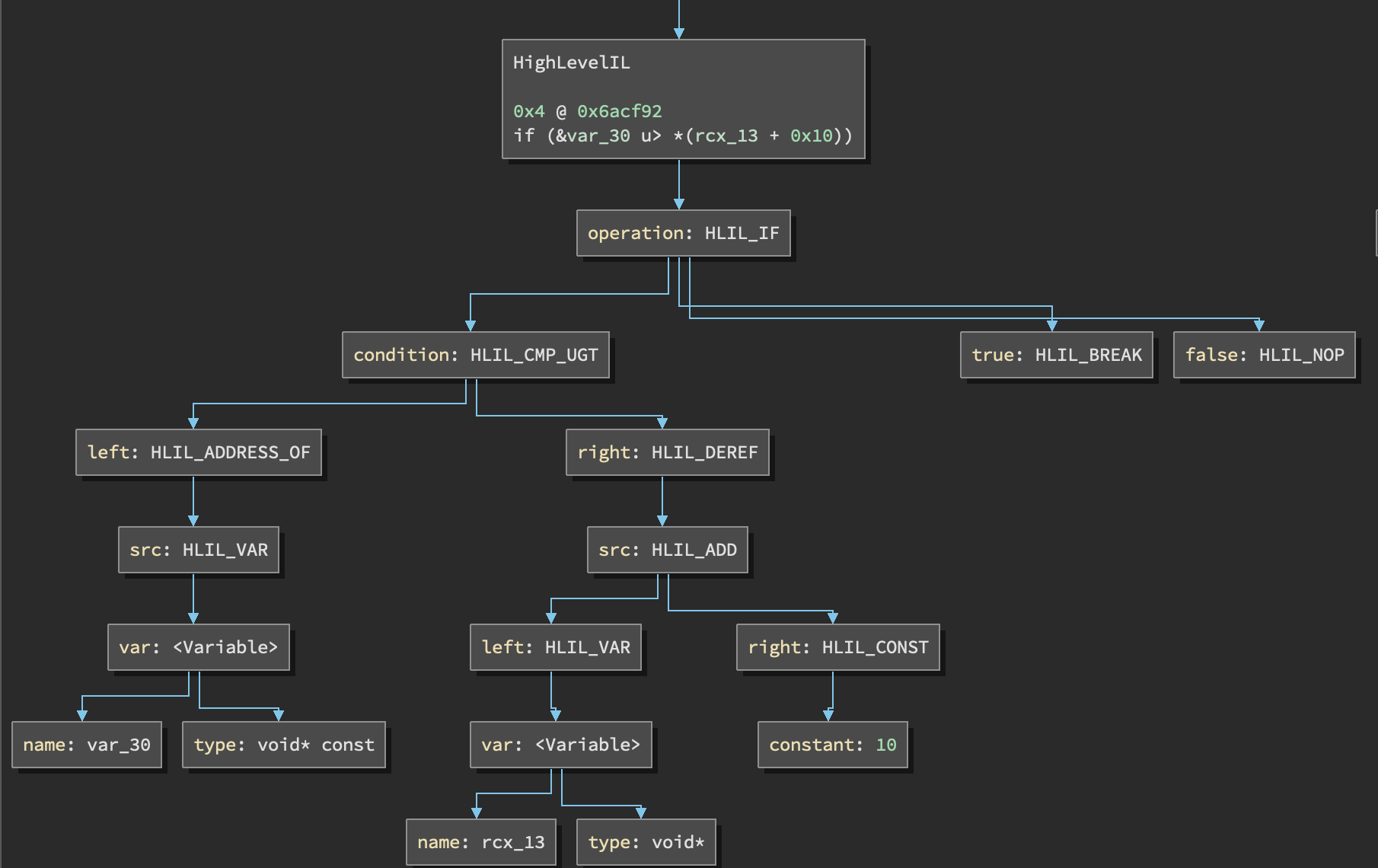 The difference in complexity between a line of LLIL and HLIL is surprising. However it makes sense once you understand that HLIL exists to allow higher level control flows to be recovered with the intention of producing a source code representation, typically in an emulator though you don’t need this kind of high level control flow data.

Another powerful feature of BNIL Instruction Graph is the ability to generate specific IL matching templates that are convenient starting points for building IL code:

As the usage of Golang by malware authors increases, so will their understanding and capabilities within the Go ecosystem. Right now gobfuscate is the main obfuscator used by actors using Golang, but this won’t always be true. As a Hacker News comment puts it: this is fairly weak. Gobfuscator doesn’t implement control flow obfuscation, the runtime functions aren’t obfuscated and at most gobfuscate serves mostly as an annoyance and a thinly veiled layer of obscurity.

It’s only been five months since the release of our HLIL decompiler and we’ve been busy on lots of fronts! Note only are we in the middle of open sourcing all of our core architectures, but we’re also launching a welcome back discount for customers who have had their support expire and are thinking of coming back and seeing everything that’s changed.

And speaking of what’s changed, just in the past three months since our last release we’ve almost 800 commits across our different repositories! That’s a lot of new changes to cover, so this is definitely not an exhaustive list, but let’s dig in!

That said, we’ve long planned on doing even more and I’m pleased to announce that today we’re publishing the first of several of our internal core architectures: ARMv7/thumb2 and Arm64 (aarch64) under an Apache 2.0 license! These join our already open source PPC architecture, and will be followed up by our remaining core architectures: x86, x64, and MIPS architectures over the next few weeks.

[Editor’s Note: This blog entry is brought to you by another of our summer interns, Chinmay. You can find more about him at his personal site. Also, be aware that this feature is currently only available on the development branch of Binary Ninja and some users may need to switch branches if they are not already on dev.]

Binary Ninja now implements User-Informed DataFlow (UIDF) to improve the static reverse engineering experience of our users. This feature allows users to set the value of a variable at the Medium-level IL layer and have the internal dataflow engine propagate it through the control-flow graph of the function. Besides constant values, Binary Ninja supports various PossibleValueSet states as containers to help inform complex variable values.

Solving an Obfuscated Crackme with Binary Ninja and Triton

[Editor’s Note: This blog entry is being brought to you by one of our summer-interns, Xusheng. You can find more of his writeups over on his github page.]

The last week’s challenge was created by Dennis Yurichev. It is also hosted on crackmes.one. The challenge is compiled by a modified Tiny C Compiler (TCC) which obfuscates the generated code during compilation. We will cover the major techniques to deobfuscate the binary, followed by a quick analysis of the algorithm itself.

While many of our users are already happily using it on the dev channel, we’re pleased to announce the release date for our decompiler/HLIL on the stable channel is May 20th, 2020.

That’s right, the long awaited Binary Ninja 2.0 is arriving in only 10 days.

With the 2.0 release comes several important changes. First, we’re including the decompiler for all current customers at no cost. All users, both commercial and non-commercial with active support will be able to download the stable update (and indeed they can all try it now just by switching to the dev channel). Second, we’re raising the base price of all versions. This reflects the increased value provided by the decompiler as well as helps us build new features at an even faster rate. See below the fold for more details.

It’s been over a month since we announced the Binary Ninja Debugger Plugin (BNDP) in beta, and as it begins to near the time it can shed its “BETA” tag, we wanted to show off the current state of the features and capabilities. Note that the debugger is being implemented as an open source plugin and feedback and code are always welcome.

State of the Ninja: Episode 13

Whew, what a crazy time it’s been lately. The world is in lock-down due to coronavirus but thankfully V35 has been able to keep working safely with everyone at home. Well, as long as you consider work-from-home with kids “safe” for some of us. We miss the office conversations and collaboration, and we’ve had to make do with fragging each other in online games and occasional video chats.

In the meantime, we’ve been able to make a ton of progress in the last several months and we’re nearing the release of our first 2.0 dev release which includes our decompiler and HLIL!

Because we’re going to have a lot of blog posts and updates coming out over the next few weeks, we wanted to make sure we got a State of the Ninja out of the way beforehand to get everyone up to date on what has happened lately.

Binary Ninja’s signature system automatically matches and renames copies of known functions based on their function signature. The signature system is designed to aid in analyzing statically-linked binaries without symbols available.

This post marks the official release of the signature system, and also serves as documentation for how it works and how to most effectively use it.

Thankfully the wait from 1.2 to 1.3 was much less than last time. Our goal is to aim for quarter releases as often as possible, and yet we still managed to pack in a large number of fixes and features into just a few months.

As always, another good reference for what has changed is our list of closed issues.