It’s been a long time coming, but it’s finally here! Version 1.2 of Binary Ninja launches today with a huge list of improvements. There’s so many features that we’re splitting this blog post into three pieces. This post covers half of the changes that have happened since the last stable release back in May. The next post will cover the remaining features from the last stable, and the third will be a higher level overview of everything that’s happened since 1.1 from two years ago.

We’re not covering all bugs fixed to keep this from turning into a full-length novel. For more details, you can always check the list of closed issues.

If you just want the highlights, here’s a short list of some of the most noticeable new features:

The new tags system grew out of a common request for some sort of bookmark set/navigate hot-keys. We could have just implemented a simple hot-key bookmark system (indeed, with UI plugins this has been possible for some time now).

Instead, we wanted to build a more robust feature. What resulted is the Tags API. This new API allows for a simple bookmark system but also much more complex Tags system. Consider, for example, taking the results of a large scale fuzzing job and annotating all crashing locations in a binary with a Tag indicating not only the type of crash but also some additional context such as the register state at the moment of crash. 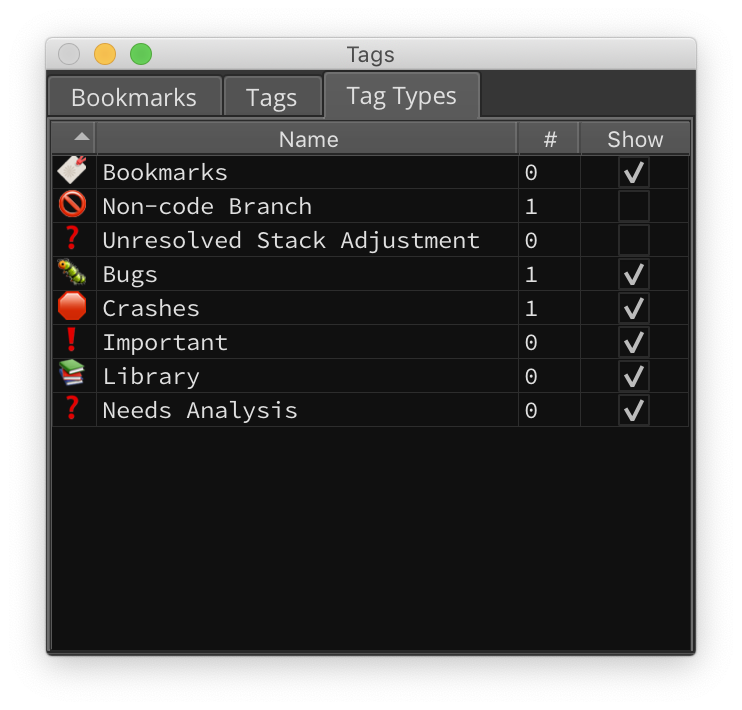 To get you started, we’ve built in several different types of tags by default, but you can of course make your own by right-clicking in the “Tag Types” window. Once you’ve decided which type to use, just right-click and select Add Tags from the context-menu. And of course, there are many new APIs for tags, but you’ll most likely want to use create_user_data_tag for data that’s not in a function, create_user_address_tag for addresses inside functions, or create_user_function_tag for tags on functions themselves. They’ll all show in the UI, but this gives plugin authors a bit more control about the types of tags they are creating. 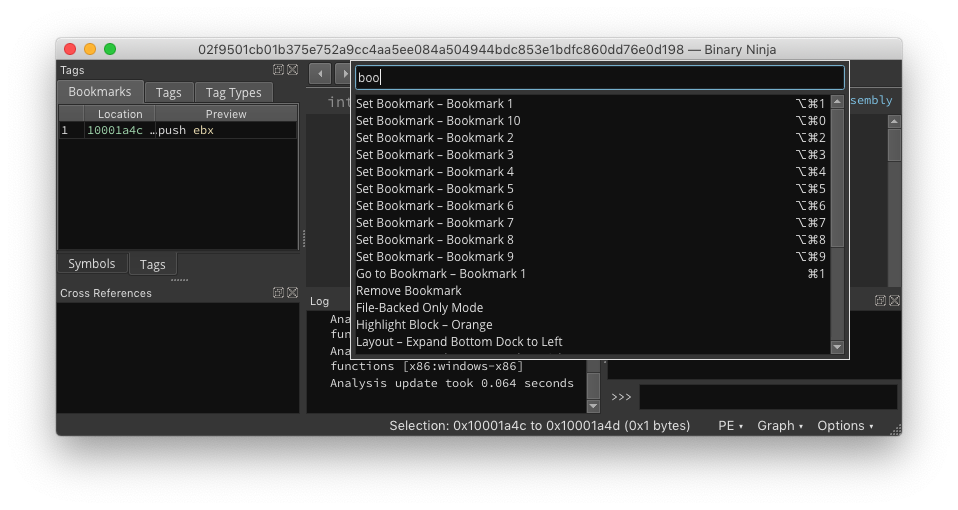 And of course, bookmarks can be easily added and navigated to with a built-in set of hot-keys (CTL/CMD + ALT/OPTION + [Number]) 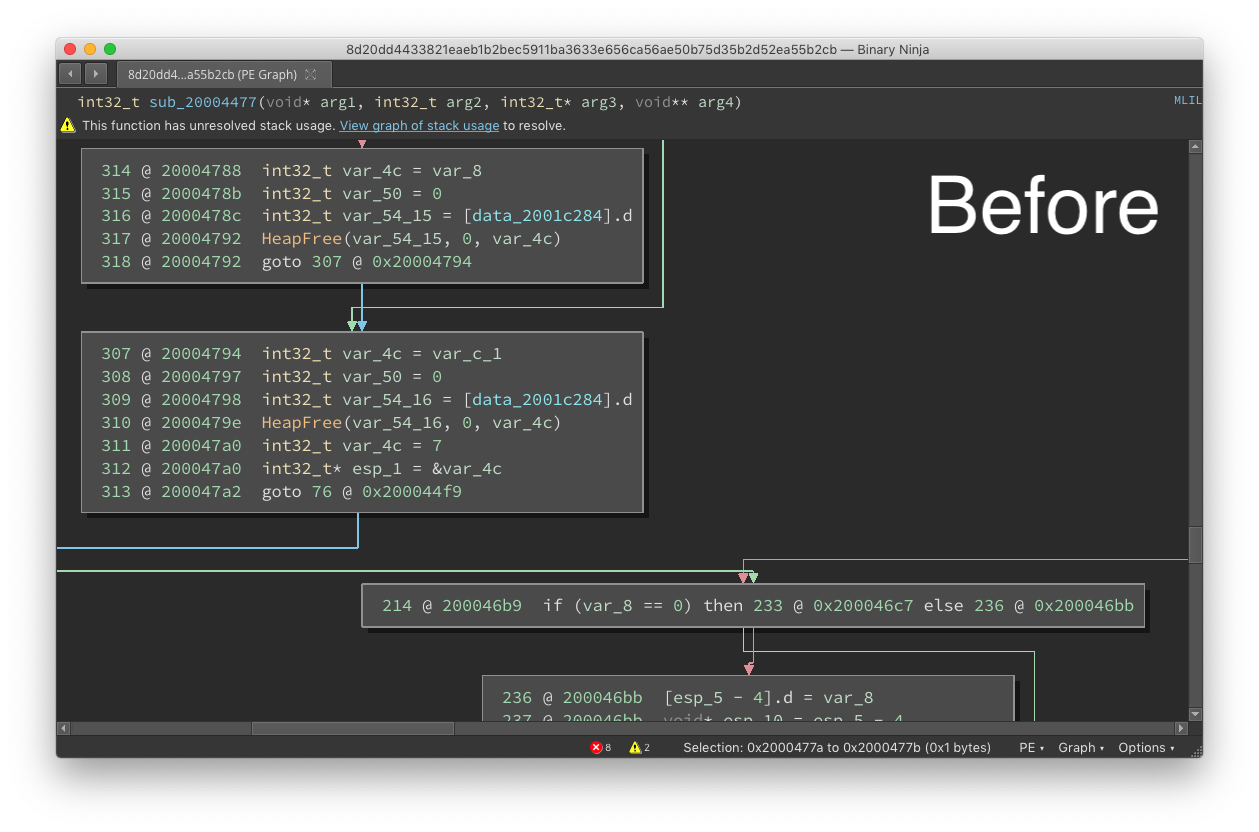 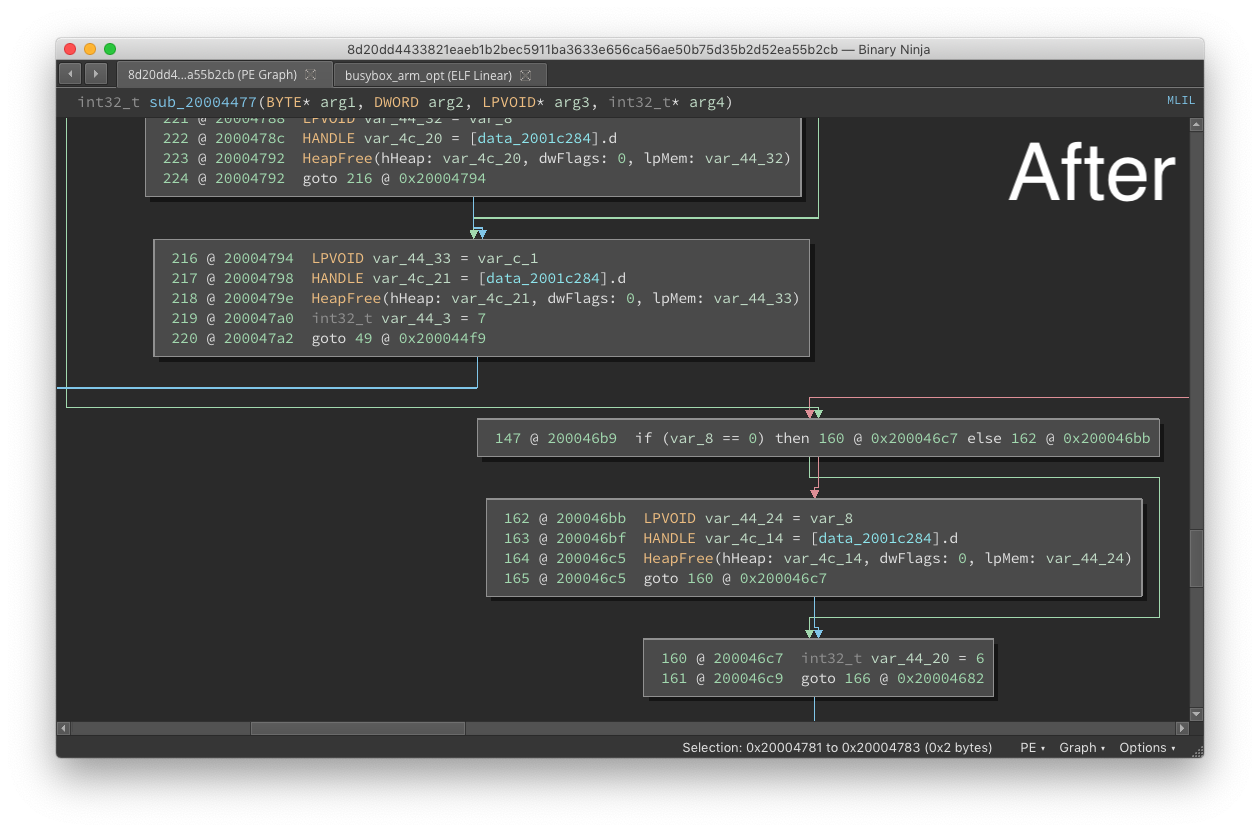 One of the most frequently requested features in 1.2, support for type libraries is finally here! The built-in library itself is still fairly sparse, containing ws2_32, advapi32, and kernel32 on x86. More architectures, platforms, and libraries are coming soon.

You can also easily make your own type libraries, check back here for a forthcoming blog that will go into more detail on how you can extend the built-in libraries with your own.

We’ve had our community repository of plugins for several years now since we know it’s important to encourage a healthy ecosystem of plugins that are actively maintained. And now in 1.2, it’s even easier to discover and install plugins. Access the plugin manager via (CMD/CTL + M), or via the command-palette as Manage Plugins.

Not only can you search for plugins you might want to install, but you can see their documentation (including any animated images thanks to the new QWebEngine integration) and install them with one click. The plugin manager has several tricks hidden in its search bar as well. You can use a number of keywords such as @installed or others to search for plugins in a particular state or category.

We’ve always planned to roll-down features from Commercial into our Student/Non-commercial version and during this last stable we went ahead and did just that. Analysis caching makes opening existing bndb’s significantly faster by caching much of the analysis data. This is particularly important when working with large binaries. 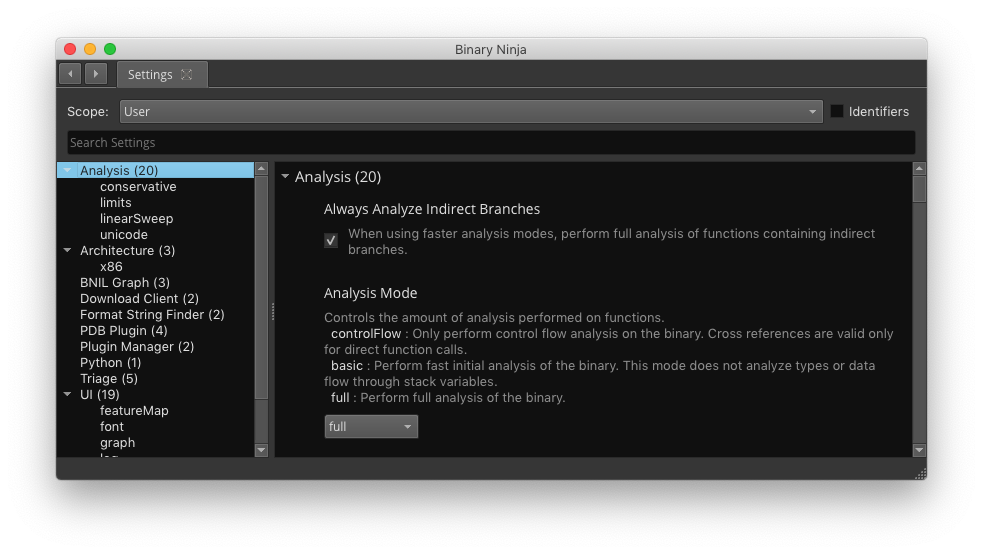 Our settings system has had a complete overhaul. Instead of the small preferences dialog in addition to the more expansive advanced settings, we now have a unified Settings UI where all settings can be searched. These settings can be specific to a single Binary View, globally for the user, and also come with defaults you can always revert to. 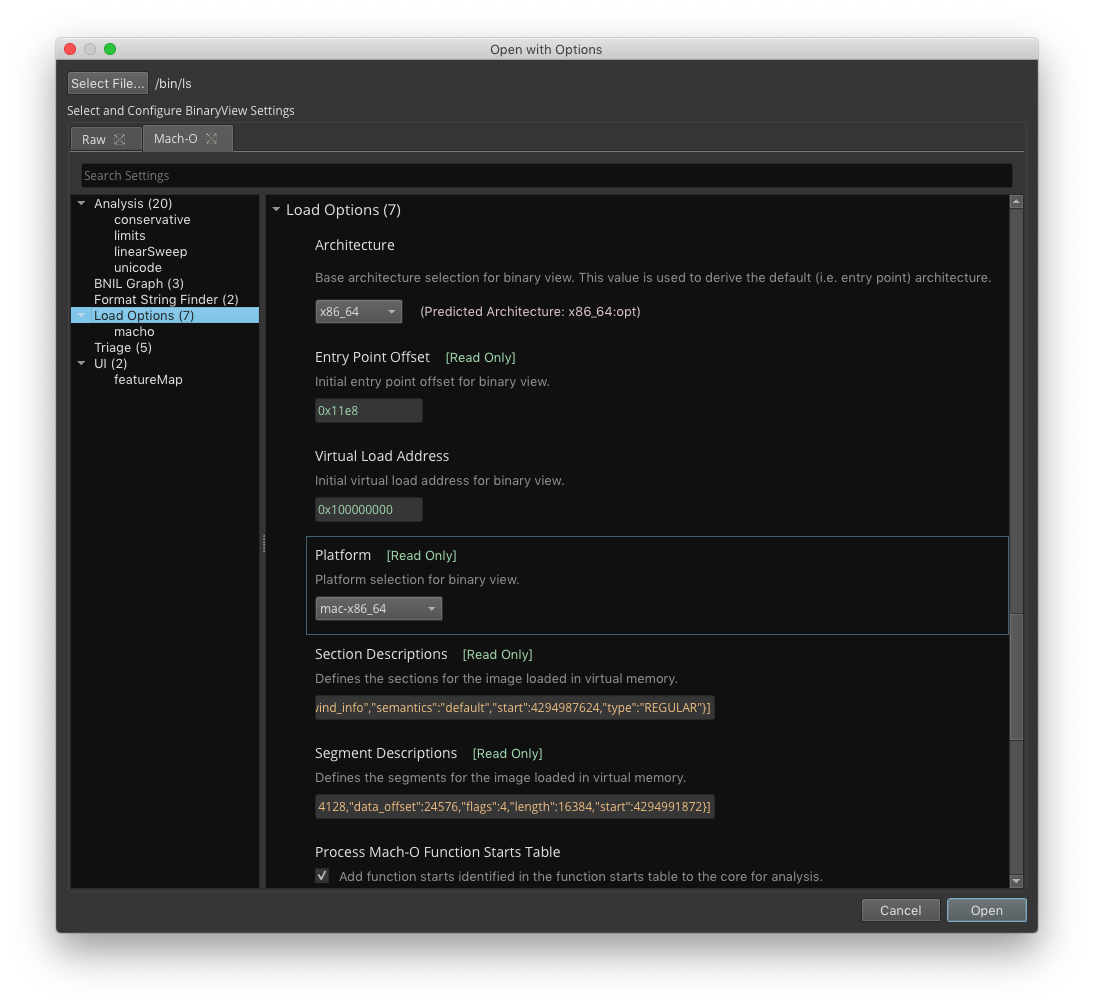 The addition of the “Mapped” BinaryViewType allows for the loading of raw binaries. One can quickly open an image and specify the architecture, entry point, load address, and load map (segments/sections) for a binary.

It is now possible to load a binary that is relocatable at a custom load address. Customizable load addresses are supported for ELF, Mach-O, PE, Mapped, and even custom BinaryViewTypes. Of course you can always rebase a raw file format as well.

We’ve added the ability to automatically detect the architecture of a binary blob which can be especially helpful for unknown firmware. This feature is currently used during the Open with Options operation and provides default architecture selection and/or hints through the Load Options.

Our API’s now enable custom load options to be provided during the BinaryView creation process. For example, Mach-O BinaryViewTypes provide a setting to optionally process the function starts segment of a Mach-O image. This enables BinaryViewType creators to provide fine-grained control over the image load process. 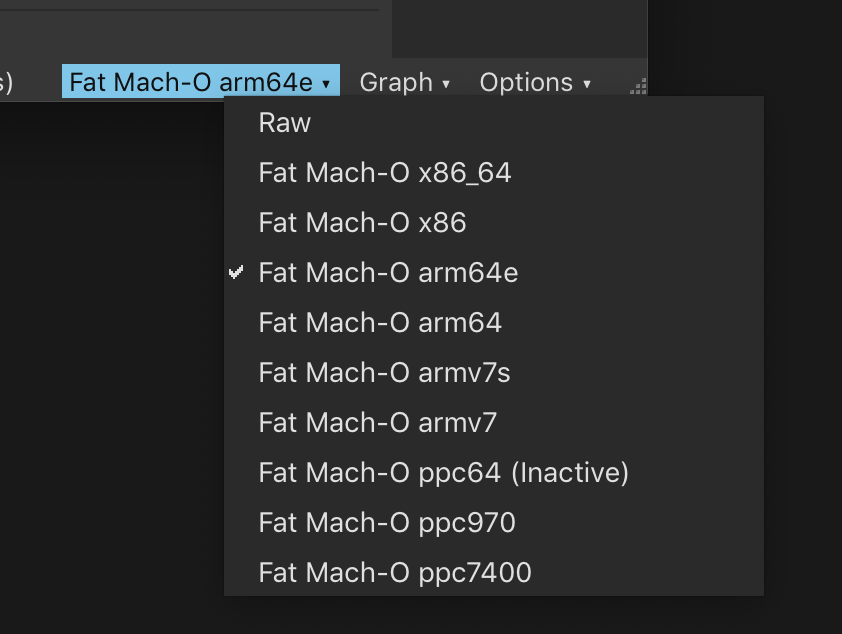