It’s that time again – we’ve just released another stable version, 2.4. This is the last in our line of 2.x updates, with our next stable update 3.0 coming next. While 3.0 contains a brand new UI overhaul, even this 2.4 release is chock-full of fantastic features, bug-fixes and improvements alike. The most notable new features include:

While our decompiler (HLIL) has had some level of support for array types from the beginning, the 2.4 release dramatically improves the capabilities. Not only does the type parser now include better support for multidimensional arrays, pointers to arrays, and arrays of structs, but the decompilation will show the results beautifully. Check out the before and after for a sample binary below: 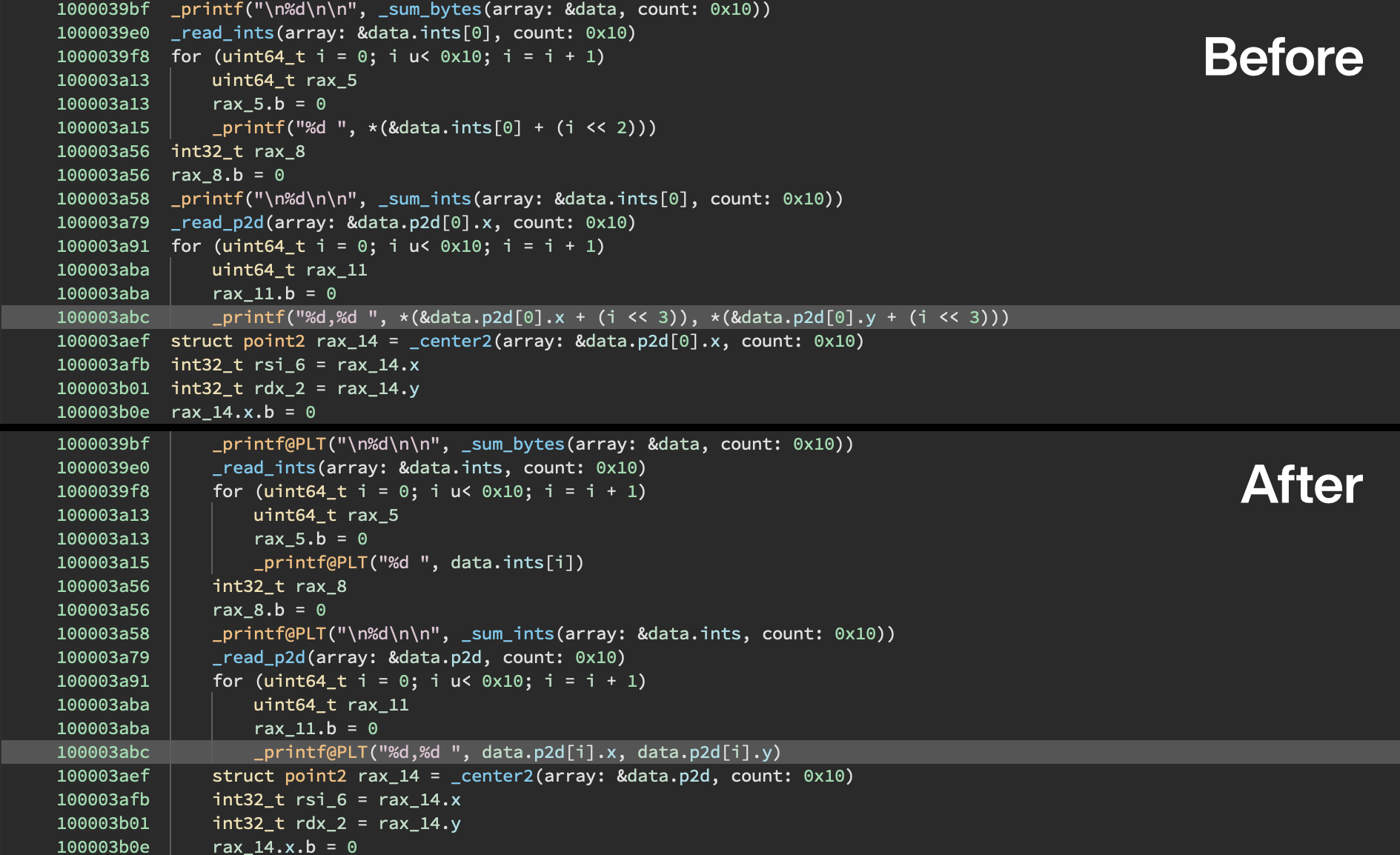 Many major changes to how searching works in Binary Ninja have landed in 2.4: 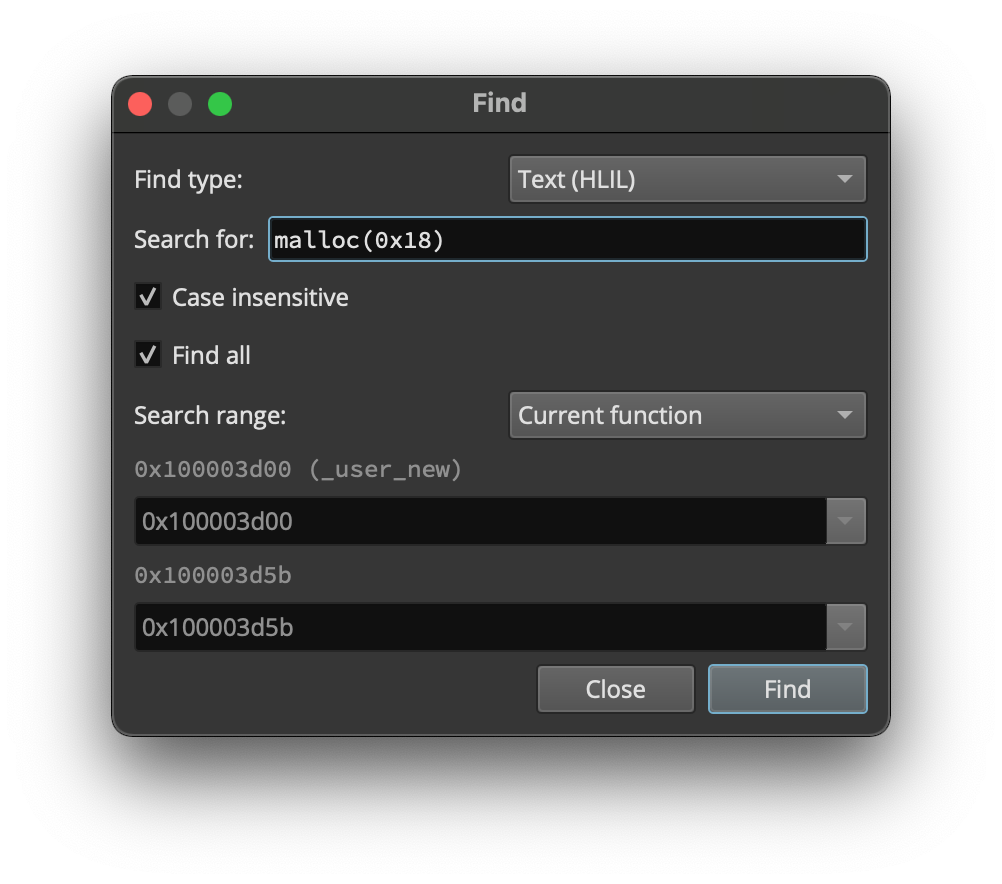 The new find dialog has a number of features to make searching binaries more powerful. You can search the current IL view or constants in the current IL view, have the ability to restrict the search to specific ranges, and most importantly, a new persistent search feature (“Find all”) lets you save a list of search results. This saved search result list allows now only for easier navigation but also additional filtering that supports regular expressions! 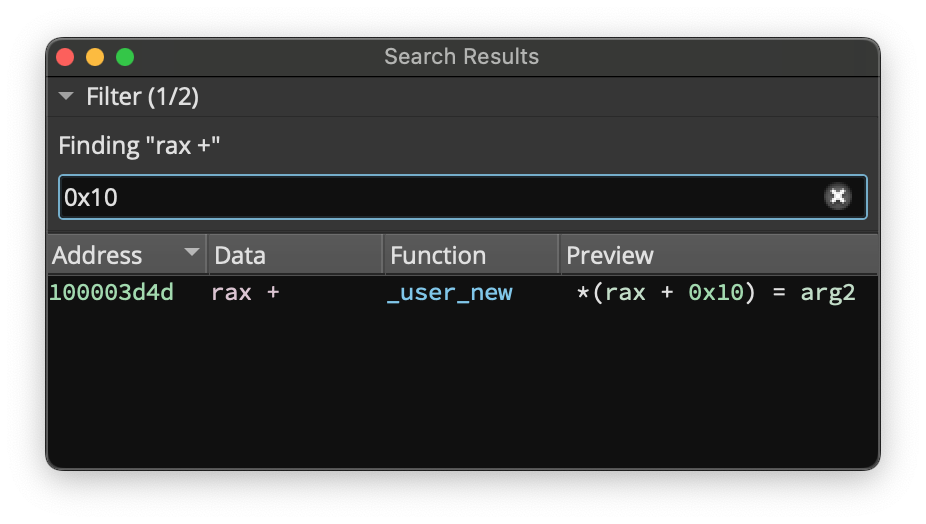 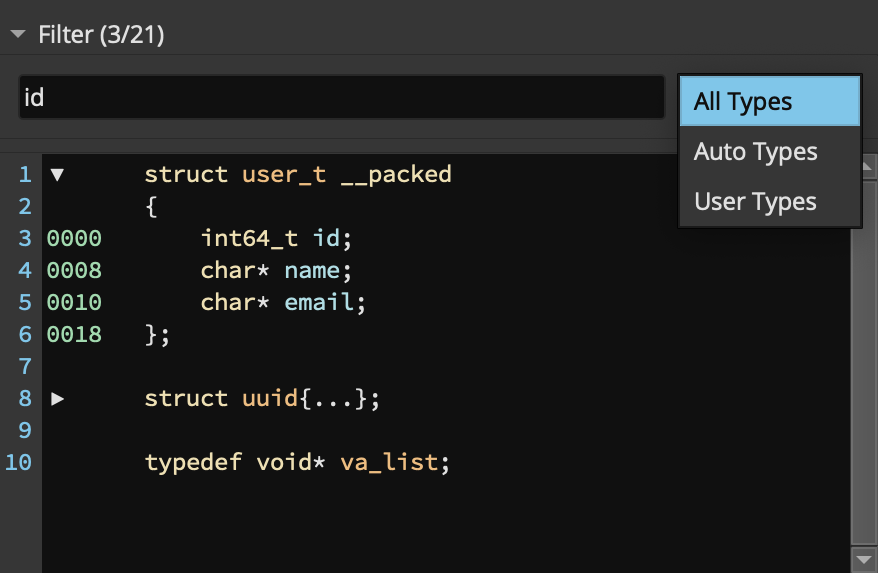 Note that the filter drop-down can also be used to only show User Types or Auto Types which is convenient for files that contain large amounts of debug information when you’re adding your own types.

Python plugins installed via the Plugin Manager will now automatically attempt to install any python dependencies specified in a requirements.txt. Note that this feature relies on having pip installed. If the requirements installation fails you can always install the requirements manually if needed.

If you’re working with many structures, our existing smart structure workflow made creating structures and members a breeze. Just hit s at the creation of a variable from an allocation and an appropriately sized structure is created and applied. Next, you can press s any time you see an access at an offset and a field would be created. With 2.4, this process is even easier. Simply create an empty structure (via types view or a single s as described above) and apply it as appropriate. Next, right-click on the structure and select Create Members at Accessed Offsets:

Once that’s done, all accesses with the appropriate size will be found and individual members will be created:

Note that this analysis is cross-function. Any reference to that structure throughout the binary will inform the creation of the members so any place you apply that structure will help complete the list even more accurately.

While everything is available via the api, it’s always helpful to have convenient dialogs to change even advanced attributes of objects and analysis when working in the UI. And with 2.4, there’s now a UI for editing several features of functions: 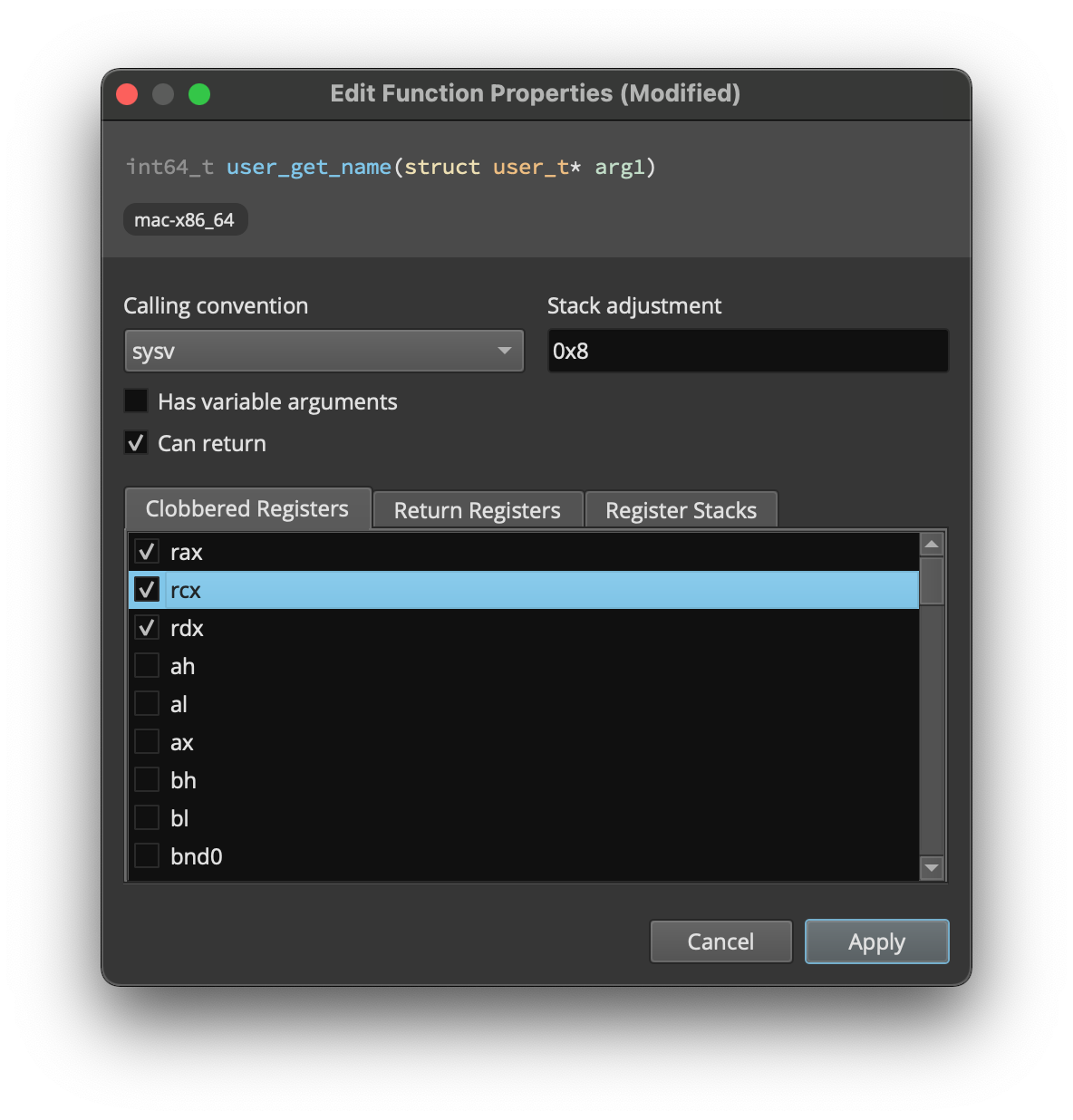 The function properties dialog offers a number of new UI capabilities. Check out the user documentation for more information.

Before we get to the remainder of our 2.4 features, we wanted to thank Mat Powell of Trend Micro Zero Day Initiative (ZDI) for several notices:

We received these notices from ZDI on April 27th and had fixes on our development branch available later the same day. We’re coordinating with ZDI on the disclosure now as these fixes have landed on the stable branch and therefore all users should be protected whether they are on the latest stable or latest dev branch.

Note that because these vulnerabilities exist in the parsing of existing BNDB databases and not raw file formats we held off releasing an immediate stable release with those fixes as we deemed the risk to our users running only the stable build as relatively small. That said, we always encourage any users analyzing potentially malicious files to do so only in a protected environment such as sandbox or detonation VM. Likewise, our dev branch will always have the most up-to-date fixes whether they be for bugs or security issues.

One note about the ZDI notices (though this may have changed from earlier drafts) – though they do mention malicious websites causing exploitation, we do not consider the risk of browsing to a malicious website to be high with these vulnerabilities. Though Binary Ninja does install a URL handler that allows files to be opened directly into BN, it always prompts the user before opening any files via the URL handler. This prevents automated drive-by exploitation of any file formats that BN supports and requires specific user action to approve opening any files or URLs.

Thanks again to ZDI for their work in helping us make Binary Ninja even more secure and for their quick communication throughout the process.

Thanks to our open sourced architectures, you can check out any of the improvements to each architecture during the last release in their respective repositories:

Note that other architectures are included with Binary Ninja that had no changes during this release and are not listed above.

And of course you can view all the other issues, fixes, and features at: https://github.com/Vector35/binaryninja-api/milestone/12?closed=1.