Binary Ninja 3.1, "the performance release" is out with major speedups and memory saving, a native debugger, better Windows types, and more!

Are you ready for the next stable Binary Ninja release? 3.1 is live today and contains many major improvements:

If you were expecting 3.1 to be the “Windows” update, we were too as that was the original plan! However, given the scope of major new features, we split the original release plan into two halves. While many Windows improvements are indeed coming in 3.1, others are now planned for 3.2, the new “Windows” release.

The headlining feature of 3.1 (and the name of the release) is “Performance”. Of course, there’s a lot of ways you can measure performance and we’ve improved most of them in this release! Let’s break down the improvements into the following categories:

Memory usage has been significantly improved in 3.1, especially with large binaries containing symbols. Our test binary is a build of Linux Chrome with full symbols. This binary is a gigantic 1.37GB in size. In previous versions of Binary Ninja, this would be nearly impossible to analyze on any normal development workstation and would likely require server-class hardware to analyze. In 3.1, a typical high-end development workstation can now analyze this binary with relative ease across all the platforms we support.

Below is the maximum memory usage after initial analysis of Chrome (all memory usage data was generated on Linux): 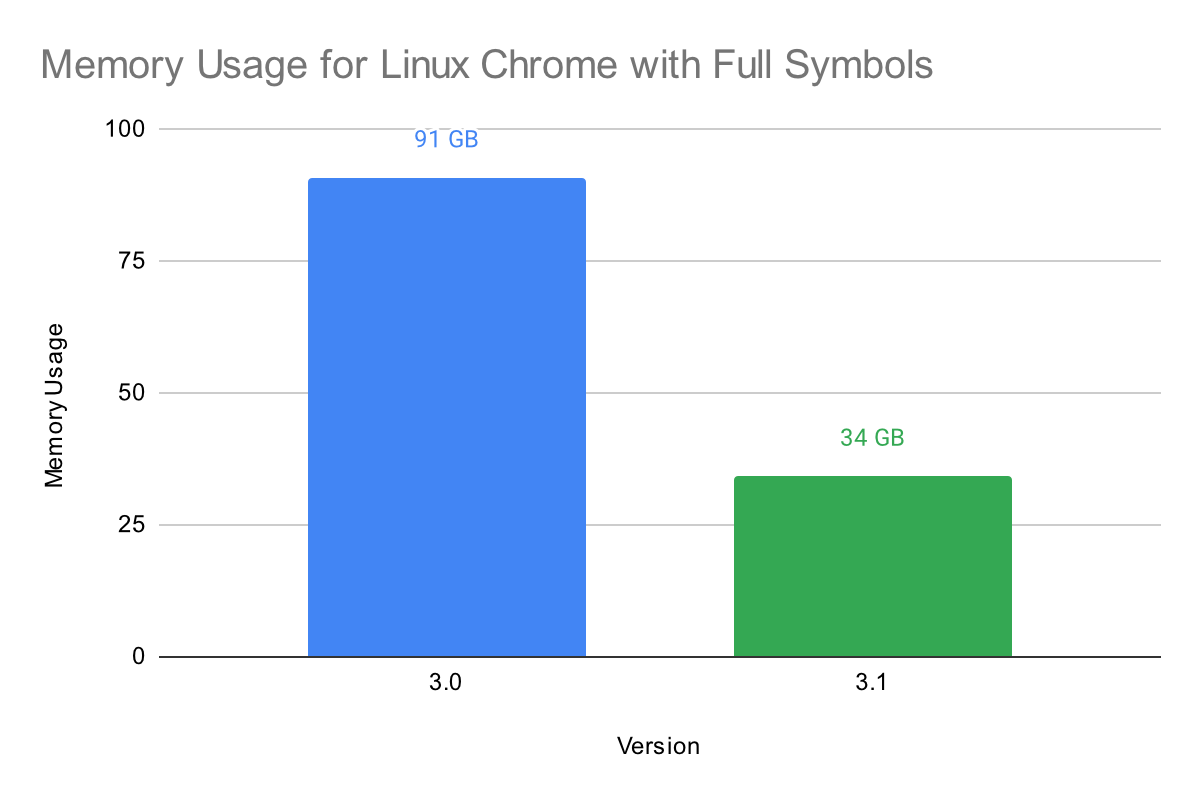 Improvements to memory usage are still significant in large binaries that do not have symbols. We used the x86-64 macOS version of XUL, the core library of Mozilla Firefox, to test this. It weighs in at a large 129.9MB and would also cause a very large amount of memory usage in previous versions of Binary Ninja. In 3.1, memory usage is much less, as shown in the chart below: 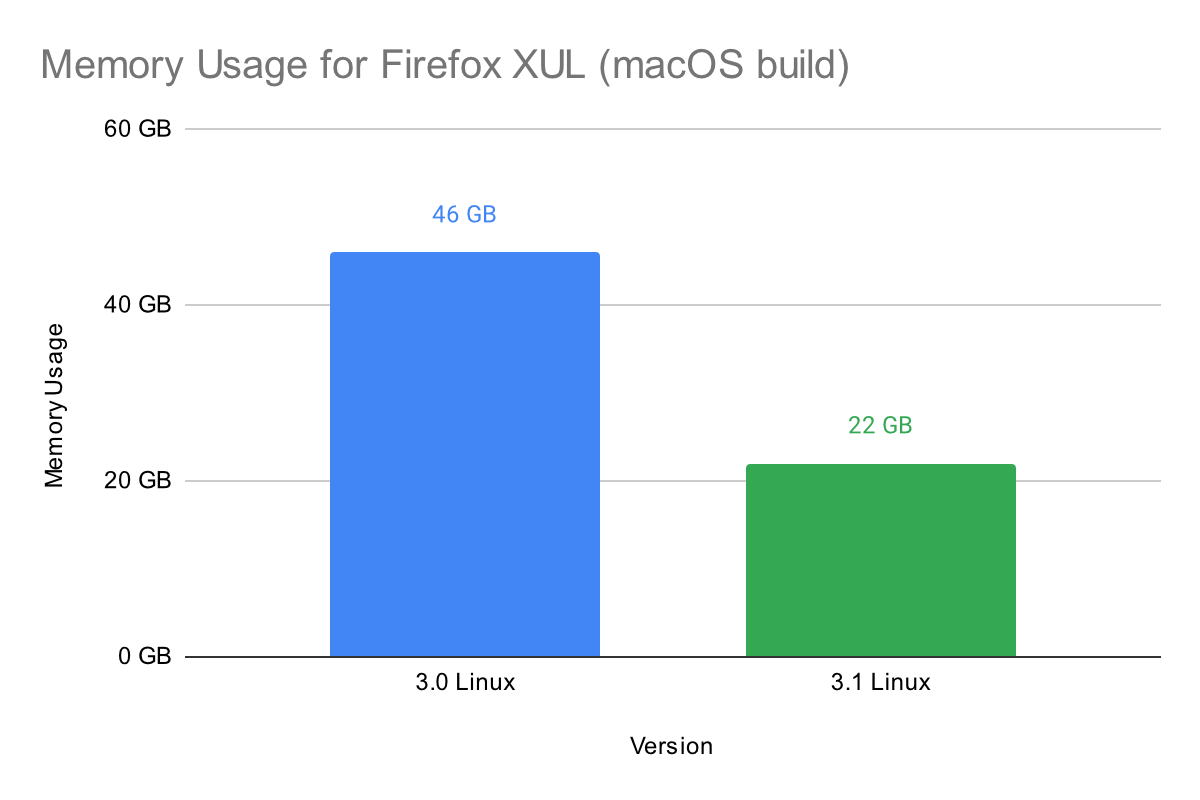 Analysis performance has also been improved significantly in 3.1, especially on systems with a large number of cores. As an example, we’ll look at performance on a 128-core AMD EPYC 7H12 system running Ubuntu 20.04. Below is a chart showing the initial analysis time for a Linux build of Chrome: 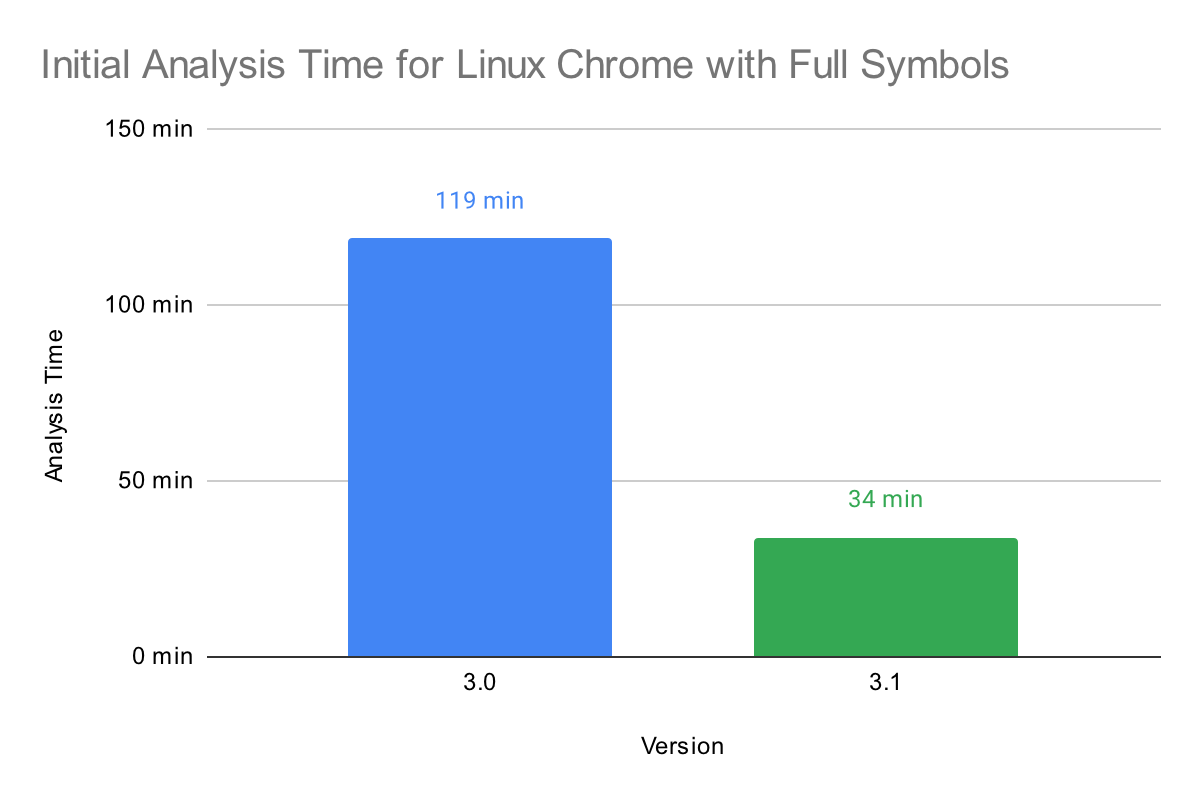 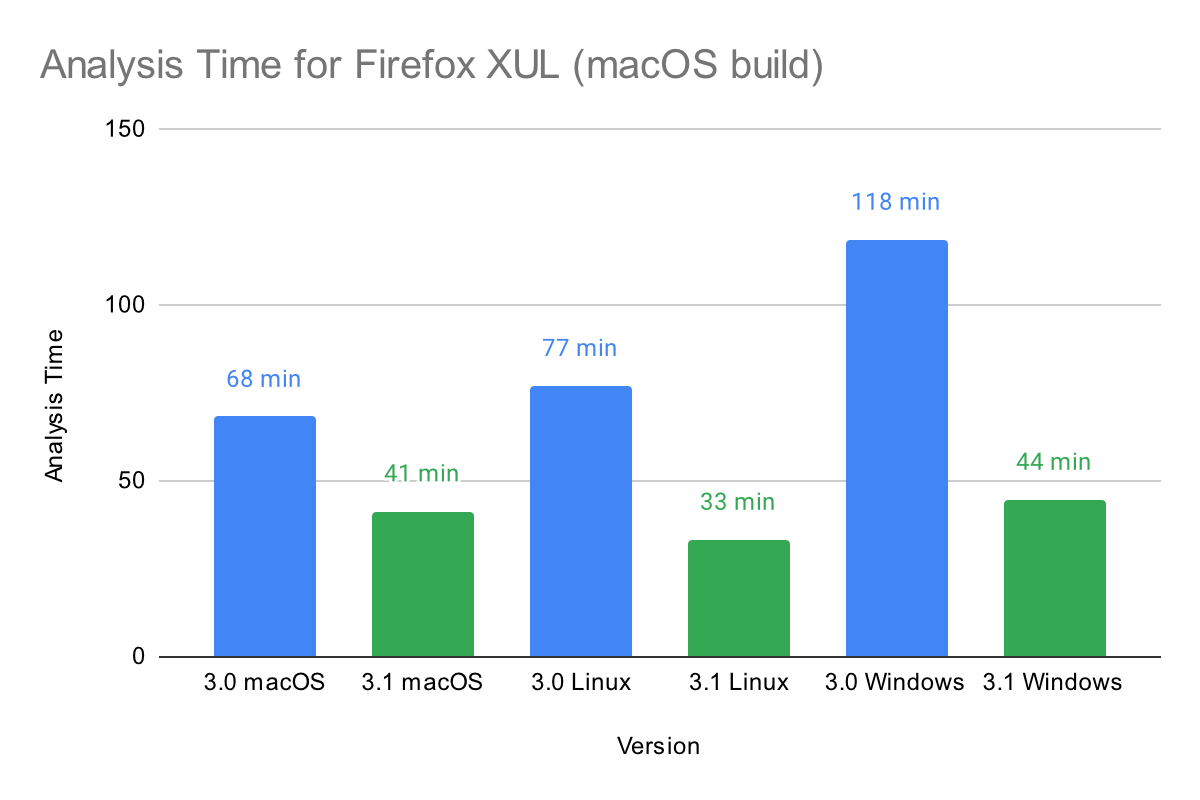 Windows performance is especially improved and is now much closer to parity with the other platforms.

Loading an existing analysis database has been optimized in 3.1, including support for multithreaded loading. Below is a chart of the time to load a database for the x86-64 macOS version of XUL: 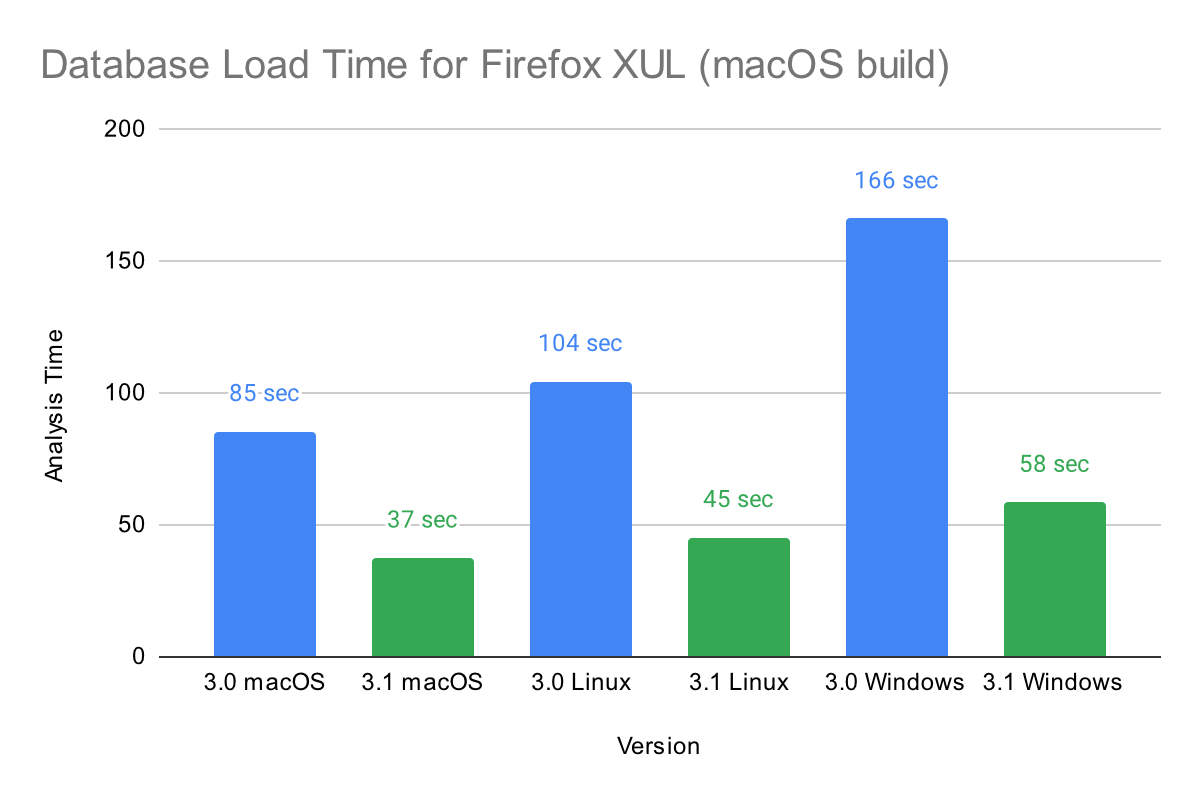 Database saving is also multithreaded in 3.1. The improvements are shown in the chart below: 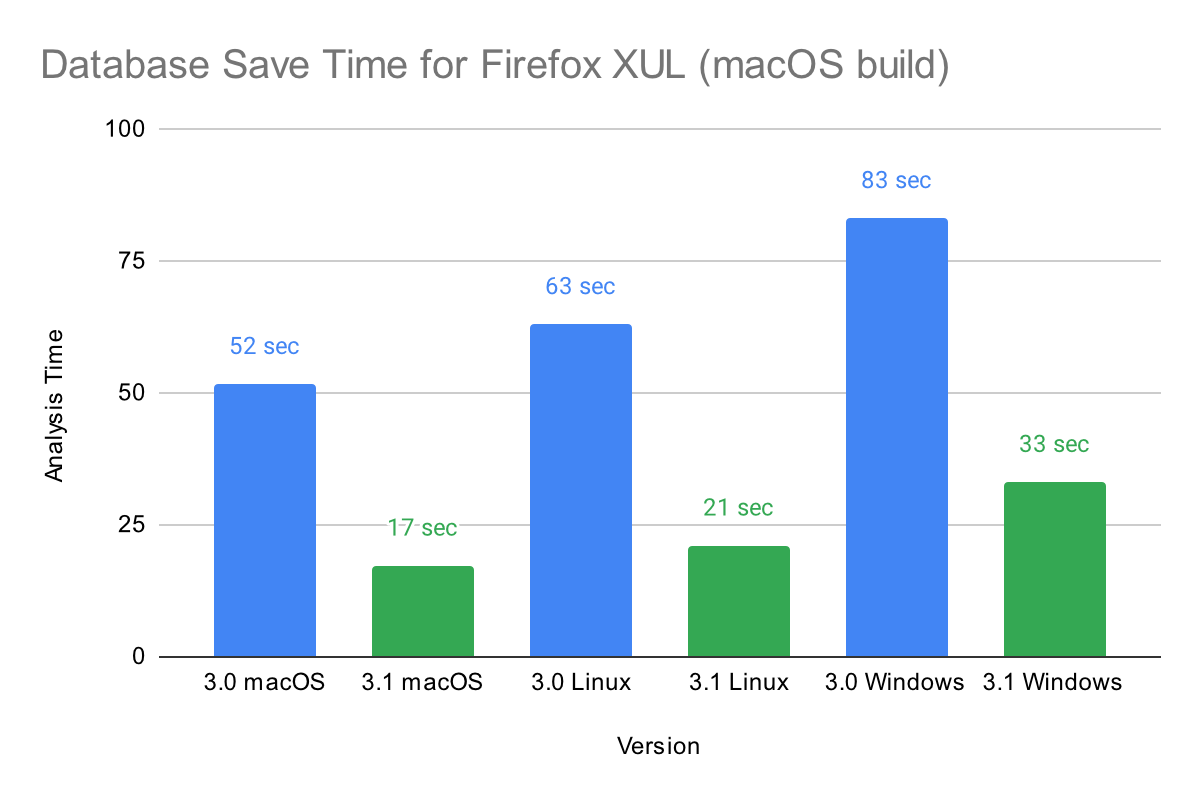 New in 3.1 is support for incremental saves. If you save a database after a small number of changes, it will reuse data that is already present in the database, dramatically improving performance. Below is a chart showing the performance of incremental saves: 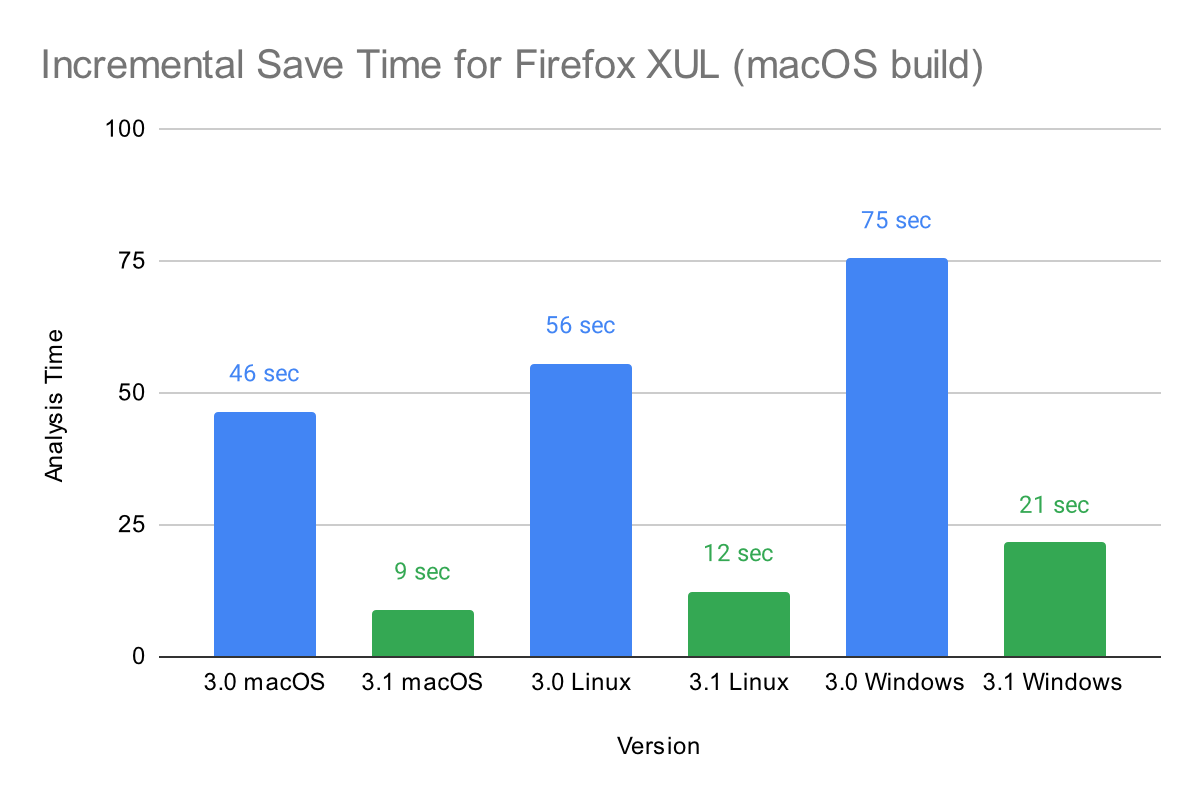 Some of the save and load speedups described in the previous section were achieved by increasing the parallelization of those processes. Of course, our non-commercial licenses were not multi-threaded before this release and wouldn’t have been able to benefit from these changes. So, we thought it was only fitting that we also release multi-threading for non-commercial licenses! 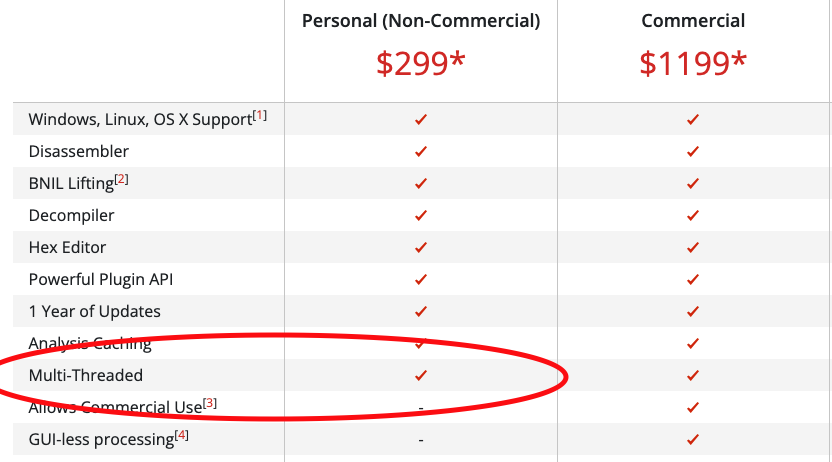 Thus, we continue our trend of adding features originally only in the commercial edition to the non-commercial edition. The two remaining distinctions are that only the commercial license allows use for commercial purposes, and of course a true “headless” feature. Headless is what allows you to, for example, write batch-processing scripts that run entirely independently of the UI:

You can still run the same APIs from the UI! So it is possible to run the same code on a non-commercial license, it just has to be run from a UI plugin or from the interactive scripting console.

The increased performance from multithreading is significant even on hardware that does not have a large number of cores. As an example, the chart below shows the increase in performance on an M1 MacBook Air, an entry-level Apple laptop that is a popular choice among college students: 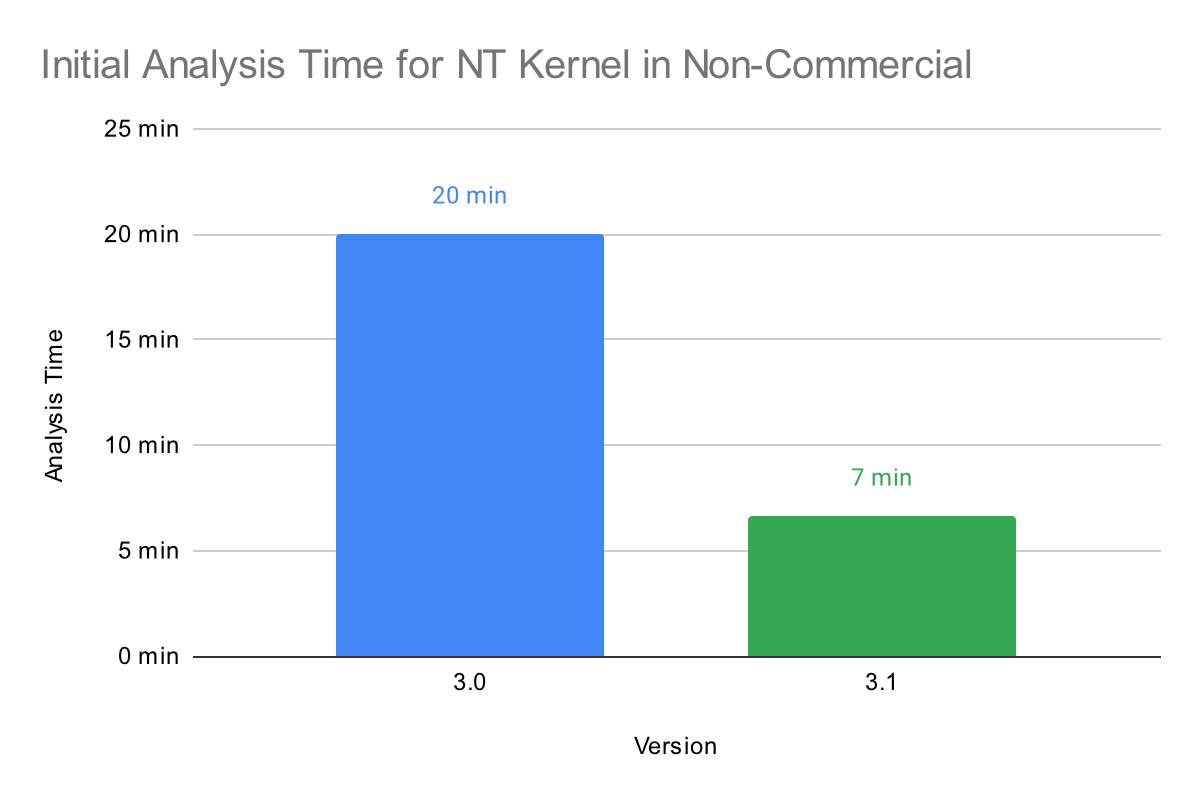 In what is almost certainly one of our highest issues-closed-per-commit ratios in quite some time, the addition of the Clang type parser opens up many new possibilities for Binary Ninja. Instead of using the prior core parser based on scc, the new clang system is able to handle far more files and of course benefits from an extremely healthy upstream ecosystem. 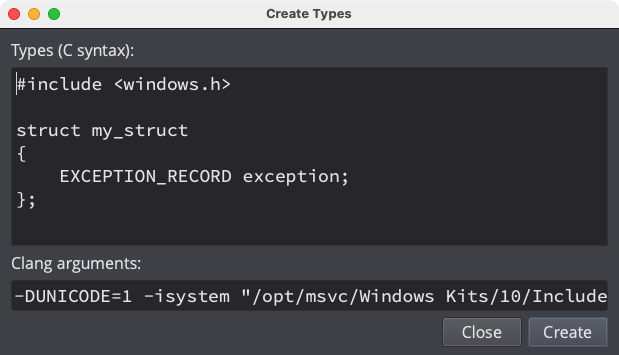 There are likely many more fixes and improvements introduced by Clang as well, but integrating such a massive change isn’t without potential risks, too. Given that, the new type parser is disabled by default on the 3.1 stable. If you wish to try it out, head to settings and switch “Type Parser” to ClangTypeParser. Alternatively, we will immediately be re-enabling it for dev branch customers as soon as the 3.1 stable ships, so you can also just switch branches.

Even though 3.2 is now officially the “Windows” release, one of the most important improvements for better support of Windows binaries has landed on 3.1 in the form of vastly improved Windows type libraries. We added type information for over 58k functions and 26k types across 3 Windows architectures! This results in dramatically better analysis for almost all Windows PE files. Check out some of the results below:

In addition to those those auto-generated type libraries (thanks to dfraze and several others [1, 2, 3] for inspiration that led to our solution), a new msvcrt was also added.

There’s still more types planned for 3.2 but this definitely represents a huge increase in the total coverage of windows types from 3.0!

The new native debugger is live in 3.1! It has not reached its final form though so we’re still calling it a beta and is it not enabled by default. In particular, we plan to make some UI changes still and there are a number of issues slated for the next stable. That said, to check it out, just searching settings for “debugger” and enable the plugin to give it a try. 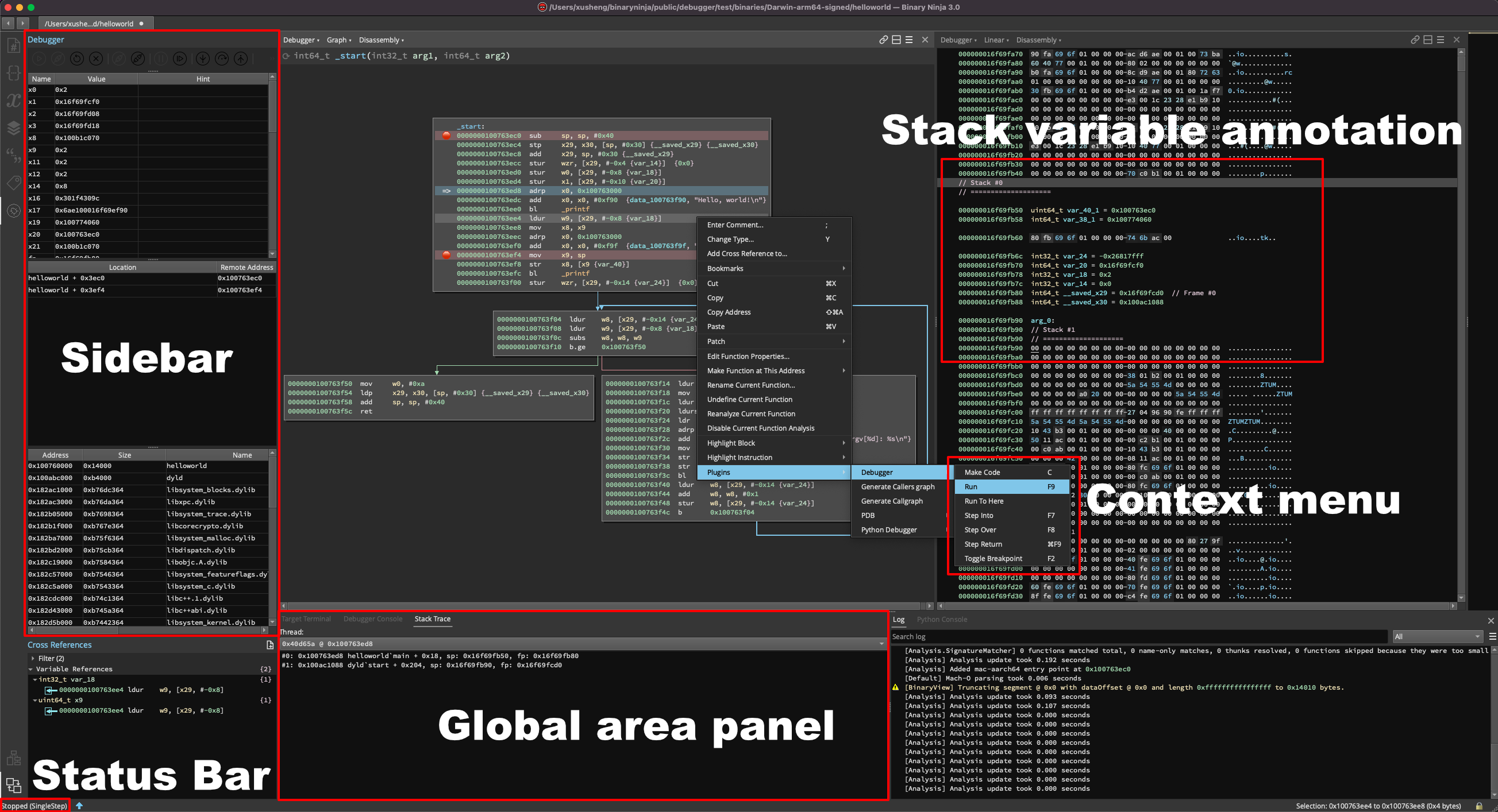 Go check out the full documentation for much more detail about the debugger, but here’s a quick overview of some of the highlights:

And of course the debugger (like most of our official plugins–even ones shipped and enabled by default) is open source, available under an Apache 2.0 license. 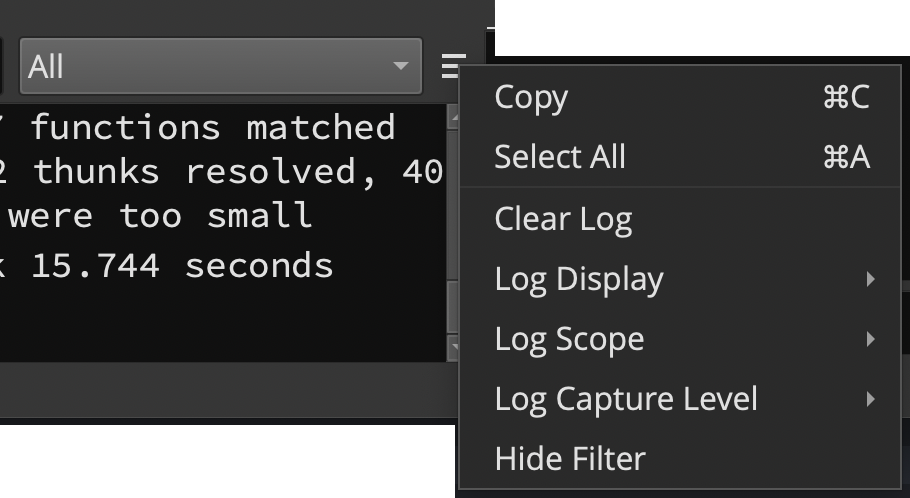 It might not be immediately obvious but the backend logging system also got an upgrade. This not only makes the log area more performant but allows for plugins to take advantage of those above new UI features (1, 2, 3).

The initial release of Binary Ninja Enterprise included the use of all our existing APIs, plus an extra Enterprise C++ API. What was missing was an Enterprise Python API; unfortunate, because that’s how most of our users prefer to interact with Binary Ninja. So, in 3.1, we’ve added a Python API to Enterprise to fill the void.

This new API lets you perform a number of Enterprise-specific actions straight from Python, including:

We’ve been using this internally to have a headless Enterprise client perform scripted actions like batch-uploading files or running analysis across all files in a project and it’s been working great! (It’s also uncovered a few bugs we’ve fixed in this release, too.) It’s our first (small) step toward making Enterprise a fantastic choice for deploying automated analysis with Binary Ninja. We hope to follow this up with even more improvements for automated workflows in 3.2.

Here’s a small example demonstrating connecting, checking out a license, and downloading all files from an Enterprise server:

Please note that, since Ubuntu 18.04 has been dropped, we have also increased the minimum required version of Python for the API to Python 3.8.

Thanks to our open source architectures, you can check out any of the improvements to each architecture during the last release in their respective repositories:

Note that other architectures are included with Binary Ninja but had no changes during this release and are not listed above.

And of course all the usual “many miscellaneous crashes and fixes” not explicitly listed here. Check them out in our full milestone list: https://github.com/Vector35/binaryninja-api/milestone/11?closed=1.